NAK Neuer Aachener Kunstverein is one of the youngest institutions of its kind in Germany; a private non-profit association for contemporary art in the tradition of the German Kunstverein model with meanwhile over 500 members. Where the Kunstverein as an institution and its significance is based on a tradition going back more than 200 years, starting in the era of enlightenment as a legacy of the rising bourgeoisie for showing contemporary art and social exchange, NAK was founded in 1986 as a late echo of the 1964 Fluxus festival, with Joseph Beuys and Wolf Vostell as center protagonists at the local university in Aachen. The spirit of this moment has since been source of commitment to contemporary art.

NAK is a core institution of the local art scene, but way beyond this, it is also internationally recognized as an innovative platform for contemporary art and its discourse. NAK has the freedom to operate relatively independent in terms of its immediate economical as well as political interests. This twofold autonomy predestines the Kunstverein to be a space for artistic experimentation, where innovative curatorial work can be accomplished without spurious consideration
for political duties or mercantile calculations. In addition, its slender organisational form allows it to react flexibly, quickly and non-bureaucratically to current artistic developments and to actively engage in these.

The NAK program reflects on visuality acting as a vehicle for information and value within the globalized economies as well as a medium of art reflecting on actual societal developments in a crystallising way for a critical temporary collective. It is oriented internationally and with consideration of the local context.

In 2000 NAK was honored with the ART FRANKFURT PREIS (former Adam-Elsheimer-Preis) for its innovative practice. In 2008 NAK was awarded the JUMP – annual prize for Kunstvereine by Kunststiftung NRW.
2013 NAK was nominated for the ADKV-ART COLOGNE Preis für Kunstvereine for the first time.

NAK is a member of Very Contemporary (a network of contemporary art venues in the Meuse-Rhine Euregion) and ADKV – Arbeitsgemeinschaft Deutscher Kunstvereine. 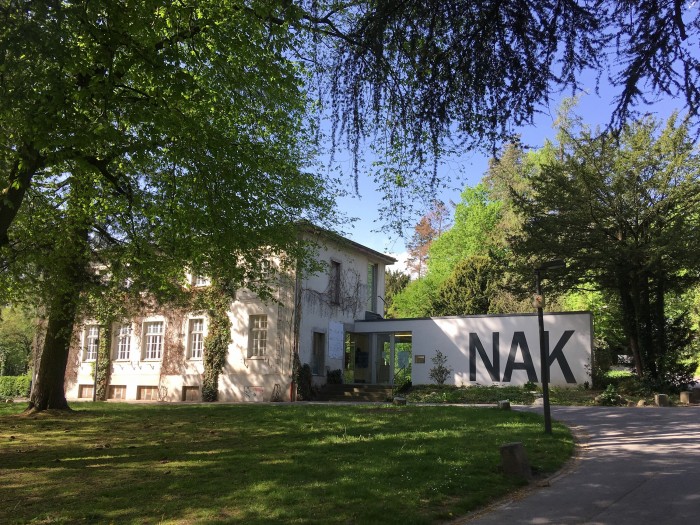