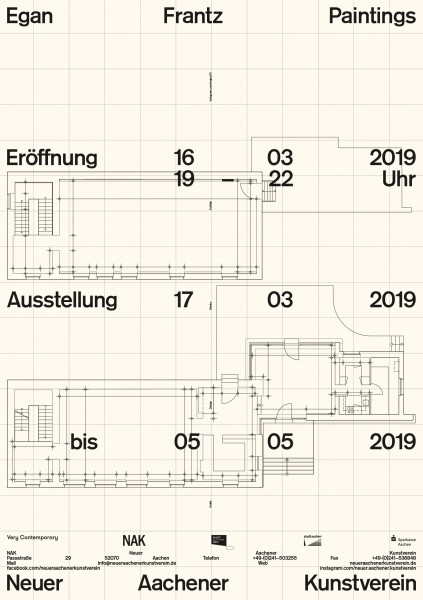 “I’m happiest when I’ve pushed the boat out so far I can wonder if it’s even mine anymore. This is important… getting the work to a place where it isn’t “me” any longer. As in, “Did I make THAT? It doesn’t look like me, it doesn’t have my signature habits… where did that come from? OK, GOOD!” – Egan Frantz

NAK Neuer Aachener Kunstverein is pleased to present new paintings by American artist Egan Frantz. The exhibition, entitled Paintings will run from 17 March through 05 May 2019.

Egan Frantz’s oeuvre encompasses an extensive variety of media including sculpture, installation, furniture design, and printed matter in addition to the traditional painted canvas or variations on that format. For Paintings at NAK, the artist has focused solely on the latter, engaging painting as painting can, with an extraordinary openness, even faith, in its ends. 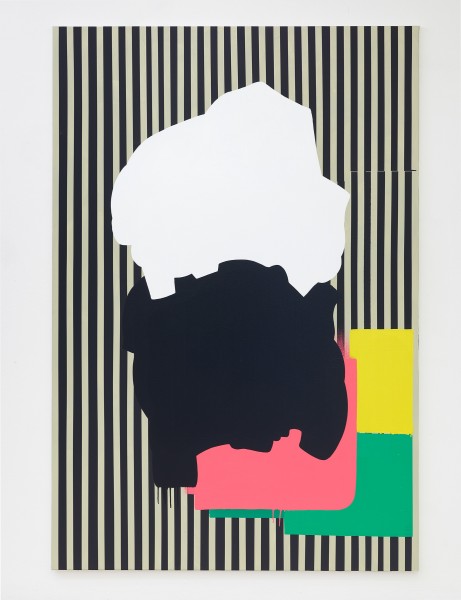 Every picture tells a story — both of its physical making and intellectually complex journey belied in conjunction with often humorous titles that point to the artist’s aspirations, inspirations, and long standing themes. Consider, Where I’m wrong the work is right, an energetic painting featuring Frantz’s signature forms, blocks or agglomerations of 3 1/2 inch brush strokes, forced into a vibrating field of black and white stripes as if held up by an abstract armature — the colors yellow, pink, and green. The title, a 1965 quote from the American poet Jack Spicer, summated the poet’s devotion to dictation against the creation myths of artistic genius, which had finally gone too far in Beatnik era San Francisco with the wild one’s, Jack Kerouac and Allen Ginsberg. Like the best philosophy of ancient Greece or the poetry of circumstance, painting is, for Frantz, best suited to follow wherever painting leads, even if that place is not where the artist wants it to go. 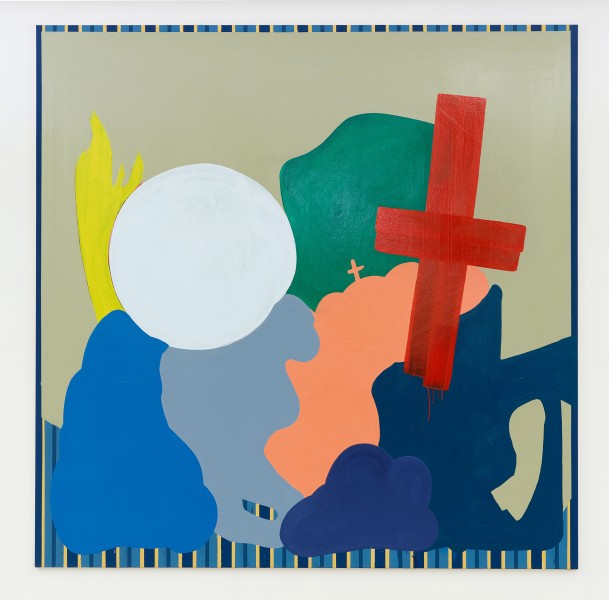 In the book of the post avant-garde, Frantz is painting the transformative chapter on post rational painting: Yes, any painting which is any good looks strange in the beginning — bad ones too!, comes to the defense of analogizing’s weakness. No, I don’t care why I painted a cemetery, offers a different kind of double negation: the large format, Christian graveyard scene rendered in a spiritual strain of turn of the century non-objective art is both quasi-representational and quasi-abstract. A small crucifix is planted on a hill, clearly in the scene, but a large cruciform is painted on the scene. The mind must traverse in and out of the field of representation to see this painting but this disjunction is, somehow, its source of harmony too. A bright white moon is licked by a yellow flame, someone deceased is remembered, and the brush goes down, up, left, and right. 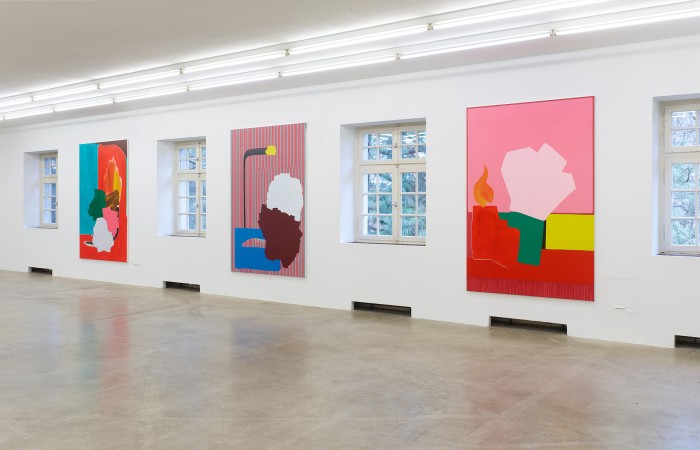 Fire makes its appearance again and again in the exhibition, but the artist is first to admit that he doesn’t know why. In a recent interview Frantz said:

“I’m happiest when I’ve pushed the boat out so far I can wonder if it’s even mine anymore. This is important… getting the work to a place where it isn’t “me” any longer. As in, “Did I make THAT? It doesn’t look like me, it doesn’t have my signature habits… where did that come from? OK, GOOD!” 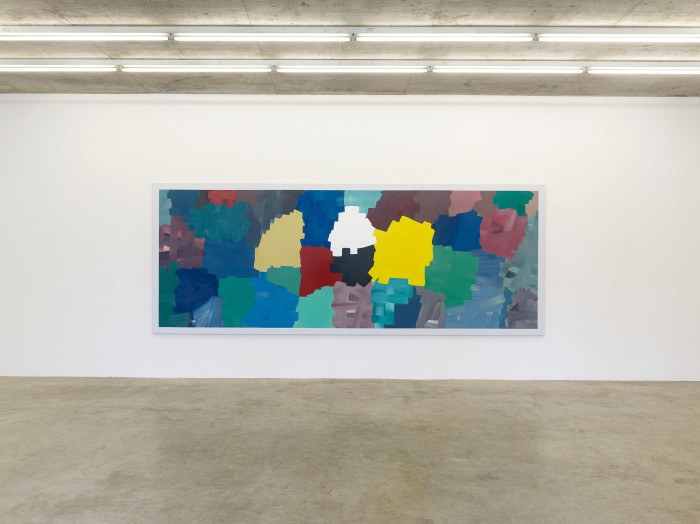 So, painting after painting, or accumulation after accumulation as witnessed in One is plenty, two is too many, and three is not enough, we find the key to the canvases of this exhibition. An idiomatic joke about drinking too much can extend into the problems of painting, installation strategies, as well as the meanings we ascribe this activity. Like a good joke, and because it’s no fun to describe a joke away, Frantz’s favoring of not knowing over creative surety ensures his audience a tax free enjoyment — post smart-ass intention. 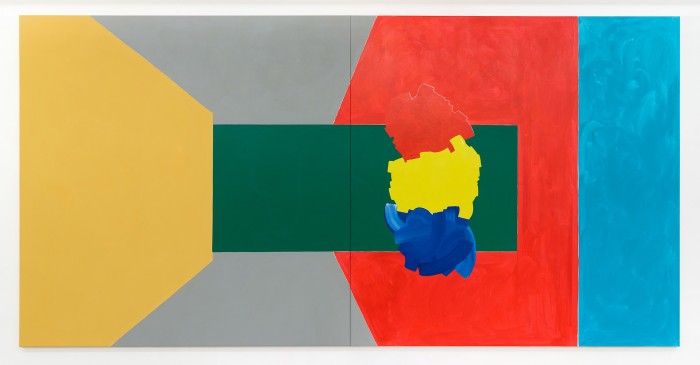 Van Der [sic], likewise, the largest and most spacious painting in the exhibition, suggests an empty signifier asking to be decoded — of the [?] — but to what end? It is known that Mies van der Rohe, a native of Aachen, added “van der” to his name to impress his future father in law. Rohe was his mother’s name, and, it seemed to him that being from somewhere looked and sounded better than just being. It worked for him. The signifier for Frantz, the “Rohe” to his “van der” as it were, or the question of where these paintings come from, if they truly are not a form self expression is left very much empty. He doesn’t care why he painted a cemetery or where he’s coming from but for the forms as they are and as they come. Amidst sandy planes and wet washes of vermillion and Caribbean blue, Frantz situates his forms in Van Der [sic] with the kind of care and sensuality we can only associate with a love for painting — and that is not a joke. 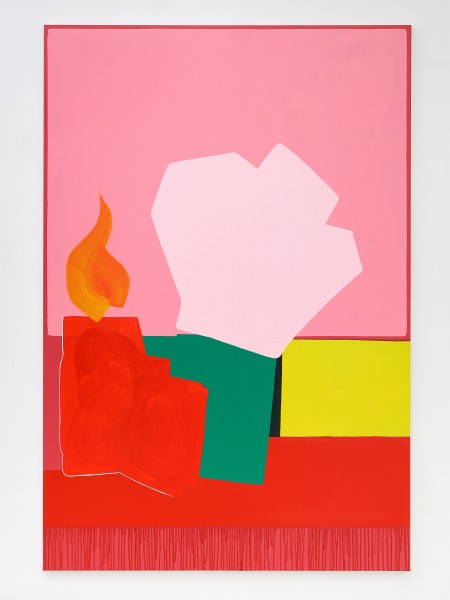