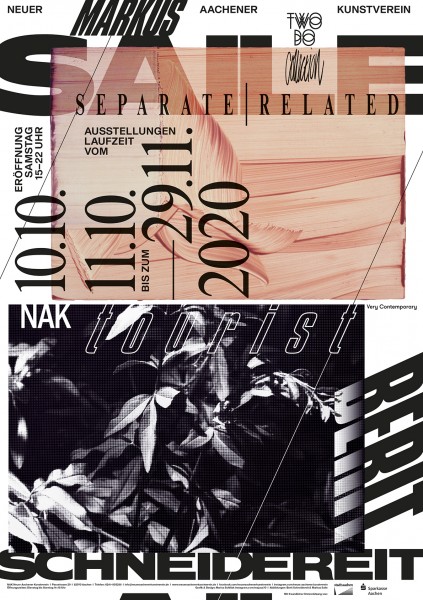 Attention: Due to the current situation we will refrain from a welcome and introduction on this occasion.

The title of the exhibition tourist refers to Schneidereit’s eager and yet at the same time easy striving to make foreign places visually perceptible and to explore them through photography. The artist varies photographic techniques and strategies, works conceptually within the medium of photography and explores its key points. The often hybrid results of this research-interested approach appear free and effortlessly. Coincidence meets discovery. A clash of analogue and digital technology creates something aesthetically new that explores both the pictorial space of photography and its surface.

By fixing the moment, the space is made tangible. But Schneidereit’s works do not show a concrete image, are not representation but rather autonomous allusion. Thus the works of the series fantasy presented at the Kunstverein show constructed places of idleness, botanical gardens, ideal-typical and not concretely locatable. In terms of motifs, these are definitely art historically charged areas. Paths that can be foreseen convey a feeling of separation but also of transition, whose digital image is overlaid and alienated by a grid structure during development. Layering on two levels leads to a dissolution of the image into structures and surfaces. The resulting photogram thus revolves around the idea of spatiality, raises an interplay of depth and surface. The artist inscribes the in-between into her work by means of motif as well as technique, thus creating an open, tension-filled space that is more question than answer. The work becomes an object, a quality that the artist always emphasizes in the presentation and staging of her works, for example through framing or loose hanging that reveals the material. This physical aspect is reminiscent of the origins of Schneidereit’s artistic genesis, which are close to sculpture.

Schneidereit also shows a series of cyanotypes in the exhibition, reduced, almost abstract works. These works, produced using one of the oldest photographic techniques, can be seen as a reaction to the figurative fantasy series and visibly and thus almost narratively depict their process of creation on the surface. Here, the moment inscribes itself into the skin of the work in a completely different way, leaving behind something fleeting, ephemeral.

The presentation at NAK is rounded down by a large free-standing frame to which three analogous exposures are fixed. This insertion doubles the park surrounding the Kunstverein and also brings a temporal element to the exhibition spaces. The triptych visualizes in three sequences an ongoing movement. Likewise, it acts like a mirror and brings the relationship between inside and outside, nature and image back into focus.

Berit Schneidereit’s interest lies in the discrepancy between the photographic image space and its surface. In her own artistic practice, she liberates photography by exploring it and thus opens up new perspectives.

Berit Schneidereit was born in Frankfurt am Main in 1988. She studied at the Kunstakademie Düsseldorf first with Prof. Hubert Kiecol and then with Prof. Andreas Gursky, whose master student she is. Her works are currently on view in the exhibition SUBJEKT und OBJEKT. FOTO RHEIN RUHR at Kunsthalle Düsseldorf. She lives and works in Düsseldorf.