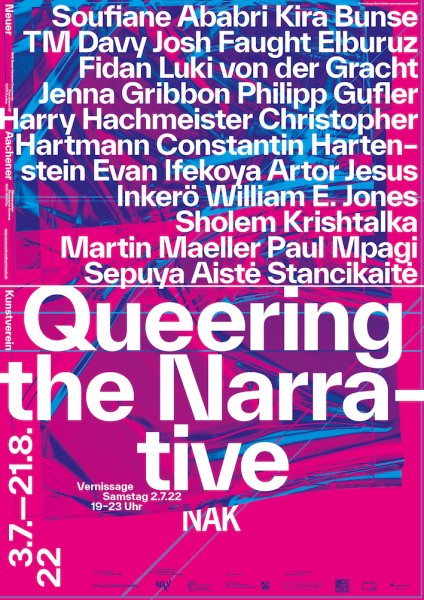 NAK Neuer Aachener Kunstverein is pleased to present the group exhibition Queering the Narrative. The exhibition brings together for the first time at the Kunstverein 19 national and international artists, all of whom consider themselves to belong to the LGBTQIA* spectrum.

Against the backdrop of prevailing heteronormative and reactionary manifestations of identity and their artistic representation, the group exhibition raises the question of queer identity and narratives and their influence on the artistic work of the participants.

With Queering the Narrative, the Kunstverein deliberately and exclusively offers space for diverse, queer positions in contemporary art. The public representation of queer issues in all media, including art, continues to draw social criticism today. This varies in intensity, based on the social and political systems as well as the geographically conditioned history in which queer concepts are negotiated, but never seems to be completely silenced, although the acceptance of queer content in the shelter of a museum or exhibition institution is growing. There, art not only succeeds in questioning heteronormative values and codes, but also shows other points of view and perspectives, while creating identification potential for queer people. With the intention of increasingly inscribing queer images in the collective pictorial memory, ideally the fight for LGBTQIA* rights is also strengthened and a normalization of queer lifestyles is pushed forward.

The selected works in the exhibition at the NAK come from various genres, so painting meets graphics, photography, installation, sculpture or video. The works sometimes reveal interdisciplinary interfaces, but are also interconnected in terms of content and aesthetics in the exhibition context, thus forming a complex web of codes and narratives. The subjects of the works are particularly diverse, both private and political in nature, partly representational, partly abstract, but always committed to the question of queer identity, to the writing of (one’s own) queer history.

Following the idea of Queering the Narrative, the Kunstverein would like to push the institutional discourse on queer contents and positions in the field of exhibitions and question the politics of power and visibility, especially in the art world. Queer identity and queer art are to be understood as a pluralistic, changeable concept, which in its manifold and positively occupied manifestations is placed complementarily alongside a heteronormative society. Queerness as a gift, you’re welcome.

Going beyond the artistic productions of the exhibition, performances, lectures and workshops will evoke alternative, as queer, spaces of action in order to foreground performative and transgressive conceptions of LGBTQIA* identity. The corresponding program accompanying the exhibition can be found promptly on the NAK homepage and will be announced on social media.

Kira Bunse (b. 1979 in Braunschweig, Germany) lives and works as a photographer in Paris. While fashion photography is the focus of her work, Bunse also has a long history of artistic exhibition activity, most recently exhibiting at ITALIC in Berlin in 2019 with a show titled Traveling Light.

TM Davy (b. 1980 in New York, USA) studied at the School of Visual Arts in New York, where he currently teaches. In his painting, which is distinctly modeled on light and shadow, Davy spans an elective network of family and friends. He lives and works in Brooklyn, New York.

Philipp Gufler (b. in Augsburg) studied at the Academy of Fine Arts in Munich and at the Hochschule für Gestaltung, Karlsruhe. Gufler’s multidisciplinary artistic practice often negotiates queer content after a prior intensive engagement with archival materials. He lives and works in Amsterdam and Munich.

Harry Hachmeister (b. 1979 in Leipzig) studied fine arts at the Hochschule für Grafik und Buchkunst Leipzig. His transdisciplinary work includes photography, painting and sculpture. He lives and works in Leipzig and Berlin.

Constantin Hartenstein (b. 1982 in Berlin) studied art and media at the UdK Berlin and at the HBK Braunschweig. In his diverse artistic practice, Hartenstein is interested in the (queer) body and its optimizations in a technological environment. He lives and works in Berlin.

Christopher Hartmann (b. 1993 in Haßfurt) studied at Goldsmiths, University of London. In his painting he explores human relationships between intimacy and alienation, closeness and distance. He lives and works in London.

Evan Ifekoya (b. 1988 in Iperu, Nigeria) works with sound, text, video, and performance to redefine art as a redistribution site for resources and power, such as for queer and BPOC individuals. Ifekoya founded the collective Black Obsidian Sound System in 2018, which was nominated for the 2021 Turner Prize. Evan Ifekoya lives and works in London.

Artor Jesus Inkerö (b. 1989 in Helsinki, Finland) studied at the Academy of Fine Arts, Helsinki and the Rijksakademie, Amsterdam. Inkerö’s multidisciplinary practice includes video, performance, photography, painting as well as sculpture; in it, Inkerö works on Western stereotypical notions of masculinity in a kind of long-term performance. Inkerö works in Helsinki and Amsterdam.

William E. Jones (b. 1962 in Canton, Ohio) studied at the California Institute of the Arts and at Yale University. For more than three decades, Jones has produced films, videos, photographs, and books in which he re-examines and reinterprets existing cultural material from archival sources. In 2009, Jones was featured in the Danish and Nordic Pavilions at the Venice Biennale. He lives and works in Los Angeles, USA.

Sholem Krishtalka (b. in Montreal, Canada) works in the fields of painting and drawing. His work often shows autobiographical references, for example, the artist portrays friends and acquaintances in oil on canvas. He lives and works in Berlin.

Martin Maeller (b. 1990) studied at the Weißensee Kunsthochschule in Berlin. Maeller’s often installative works feed on personal experiences, pop culture and mythology and reinterpret them in the supposed use of everyday objects. He lives and works in Berlin.

Paul Mpagi Sepuya (b. 1982 in San Bernardino) studied at the University of California in Los Angeles and New York’s University Tisch School of the Arts. In his photographic works, self-reflexivity always plays a major role as well as the examination of the medium of photography. The works also question the idea of identity and representation. He lives and works in Los Angeles, USA.

Aistė Stancikaitė (b. 1988 in Lithuania) studied art at the Vilnius Academy of Arts. She works in monochromatic drawing and painting, achieving texture and depth through detailed use of violet and red tones. The artist thus questions the perception of reality through the precision of her artistic practice. She lives and works in Berlin.

Luki von der Gracht (b. 1992 in Aachen) studied at the Düsseldorf Art Academy. The artist pursues a multidisciplinary approach of performance, painting, drawing, video and installation that thematically revolves around questions of identity, community and power structures. She lives and works in Berlin.

With the kind support of