quixotic essence of a breath of movement / 1x3
Daniela Georgieva 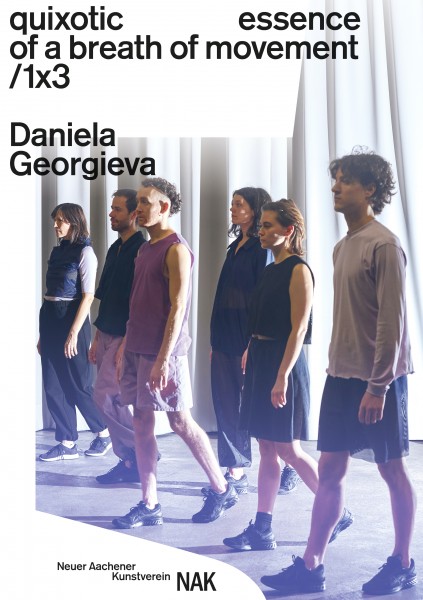 NAK Neuer Aachener Kunstverein is pleased to present quixotic essence of a breath of movement / 1×3, the first institutional solo exhibition of the artist Daniela Georgieva.

Performative formats in institutional spaces of art shift the focus to what can be experienced “live” on site, the concentration on the presence of moving bodies in space and the indispensable transience of the event. But what does it mean for a choreography to adopt the format of an exhibition? This question is the starting point for Daniela Georgieva’s project quixotic essence of a breath of movement / 1×3, which deals intensively with the radically different temporal, spatial and perceptual conditions of an institutional space. Geogieva develops a performative structure for the rooms of NAK, which also rethinks it as an exhibition open to the public during regular opening hours. The time condensed in the performance becomes a new form of duration, the space a space of encounter.

For some time now, Daniela Georgieva has been intensively engaged with the Judson Dance Theater, an association of dancers, choreographers, visual artists, composers, and filmmakers founded in New York in the 1960s that redefined what can be considered dance. The performances of the Judson Dance Theater encompassed everyday movements and gestures, taking up the structures of games, simple tasks and social interactions. Spontaneity and unconventional compositional methods were emphasized. With its cross-genre approach, which sees itself as a physical approach and physical experience of art, dance and minimal music, Judson Dance Theater shaped the “fluid” approach that is essential for our current understanding of performance art. Daniela Georgieva is interested in movement derived from everyday life and based on improvisation as a striving for freedom and diversity in a dance that makes “common” movement patterns conscious. She further develops the minimal narrative language associated with Judson Dance in her own dance-choreographic work and places an increased focus on the relativity of body and space. The approach of the body to its surroundings is matched by other elements such as objects, light, sound and voice. Collage, fragmentation, loosely structured scores, chance and spontaneity also characterize quixotic essence of a breath of movement / 1×3. “1″ stands for the body, “x” is space, and “3″ is object, music and language. But “x” also means the place where all elements meet.

Six dancers interpret movement patterns of walking, jumping and meeting. Their performance, which is always slightly different, can be seen at intervals during the opening hours of NAK. Drawings of the scores and video recordings of the creation process, but also of the “final” piece, are understood in parallel as an invitation to the audience to performatively explore their own movement. The question of the medial transcription of the dance-performative is also raised: What happens beyond the currently visible “performance”, what resonances does the performative generate in space, and how can it be documented?

quixotic essence of a breath of movement / 1×3 unfolds a field of tension between choreographed and everyday movement, between subject and object, spectators and participants, which productively undermines expectations and attributions in order to activate the sensitivity and self-reflection of the spectators.

To find information on the current progress of  the upcoming exhibtion visit the project blog Judson Dance Rework.