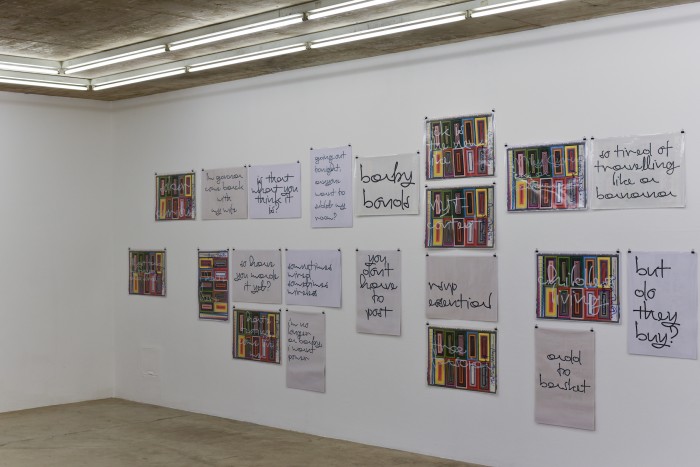 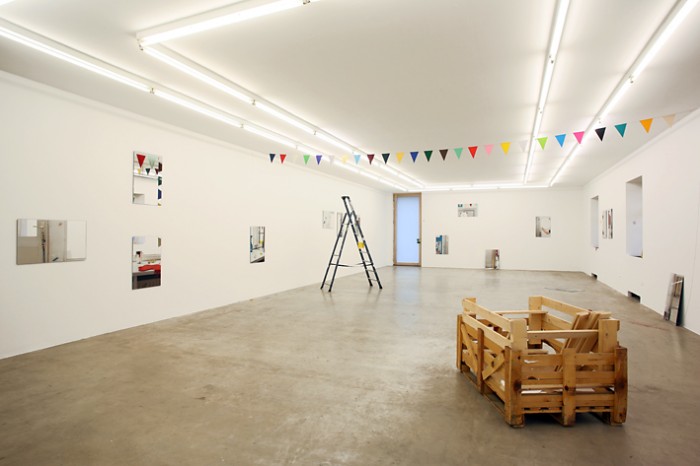 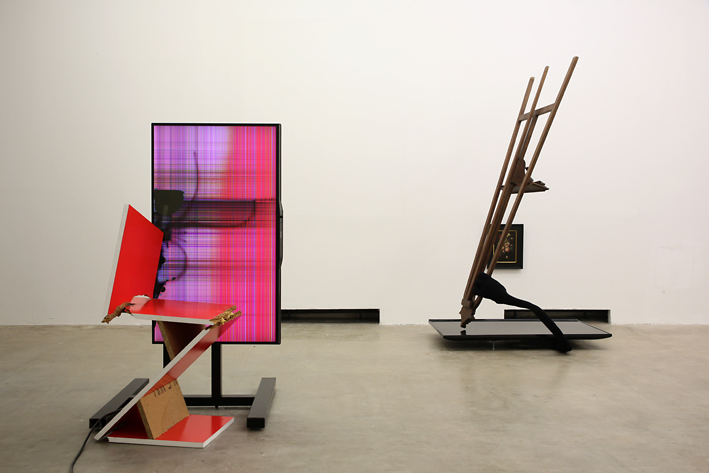 One second of a film consists of 24 single images. The second chosen by Jan Timme is taken from the movie “L’argent” (1983) by Robert Bresson and depicts how banknotes – among them one fake – change hands. With “Eine Sekunde” Jan Timme initiates a complex buying process as well as raffle and exchange processes challenging the mechanisms of market principles and capitalism and expanding the scope of possible operation by the principle of contingency. 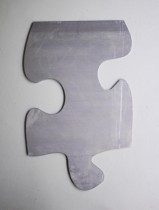 In his works, Jonathan Monk combines joke and irony with precise references to the substantial currents of the art of the 20th century in a very personal way. Particularly the Concept and Minimal Art of the 60′s and 70′s are an essential point of origin for Monks own artistic work. Therefore he strip-searches the meanwhile canonical works with their demand on objectivity and the autonomy of the aesthetic object for a very personal analysis, which lends a subjectively interpreting note to the strict rules of the art at that time.

For the Twodo Collection of the NAK Jonathan Monk has developed a 24-parts puzzle, that has been manufactured in the format 2.20 x 2.95 m from rolled steel sheet. Put together, a closed rectangle develops from the puzzle parts, which reminds of minimalistic soil sculptures of Carl André.

Each Twodo member possesses at least one part of the puzzle as well as the artist, so that joining of the work is only possible in a joint meeting. The Twodos and the artist are in that way connected by the developed work beyond the duration of the project.

MICHAEL STEVENSON
The Gift: The form and reason for exchange in archaic societies
2005

The exhibition by Michael Stevenson (*1964) forms the endpoint of his multipartite project, which he developed on to this point and for more than a year for the collection groupTwodo. The Gift: The Form and Reason for Exchange in Archaic Societies resumes the different stages of a multipartite project by Michael Stevenson. After stages of the project in May 2004 under the title Argonauts of the Timor Sea at Darren Knight Gallery in Sydney and in December 2004 at Herbert Read Gallery in Canterbury, UK, a kick-off took already place on May 21st 2005 at NAK under the title The partition. Here the main object of the project, a life-sized raft, was parted in its individual parts with a saw by Stevenson and with active support of the present Twodos. The pieces of parted rafts were manufactured into objects such as fans and ash trays and given to the Twodos afterwards.

Regarding content the project is based on the real story of the destitute scottish painter Ian Fairweather, who lived in Australia in the 1950s and went on a audacious sea trip, when learning from a newspaper that one of his paintings was shown in the Tate Gallery in London. Inspired by Kon-Tiki by Thor Heyerdahl he build a raft out of three aircraft tanks and a silk parachute, which so to speak fell out of the sky. After sixteen days on sea he stranded on the little indonesian island Roti, completely exhausted, soaked and almost starved. The inhabitants welcomed Fairweather very reluctant, but shared the parts of the remaining raft and understood them as delivered gifts. In return they provided accomodation and care.

JOHANNES WOHNSEIFER
what has bilderberg twodo with black helicopter ?
2002

The series of works Wohnseifer created for Twodo refers to concepts of power, control and secret societies, which play a subtle role in the whole work of Wohnseifer. The Twodo collection made possible the creation of a multipartite complex of works consisting of many different media. 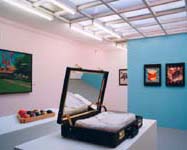 Based on Mel Chin’s and the GALA Committees Melrose Place project Fareed Armaly installed the acquired objects of Twodo at Künstlerhaus Stuttgart in order to create a display for another, self-conceived soap opera called “Malrose Plays”.

Every member of Twodo had the opportunity to choose a certain requisite, which would influence the screenplay written by Farred Armaly and Rainer Kirberg (director and script writer). At the end every Twodo member acquired a part of the specially designed screenplay corresponding to the object chosen. 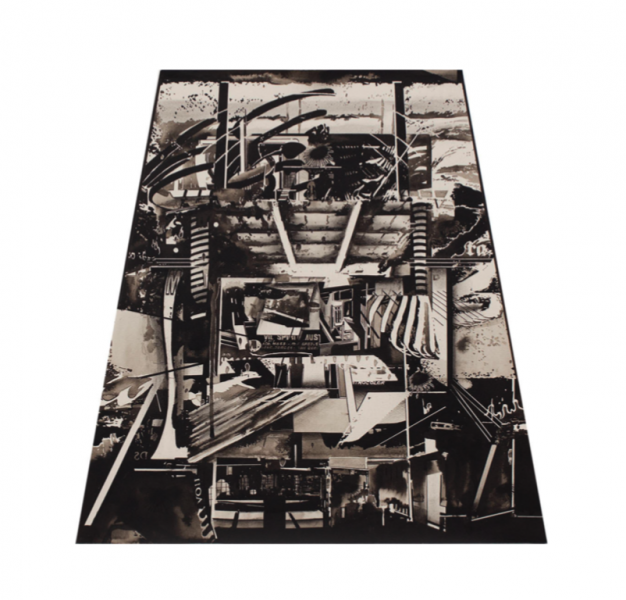 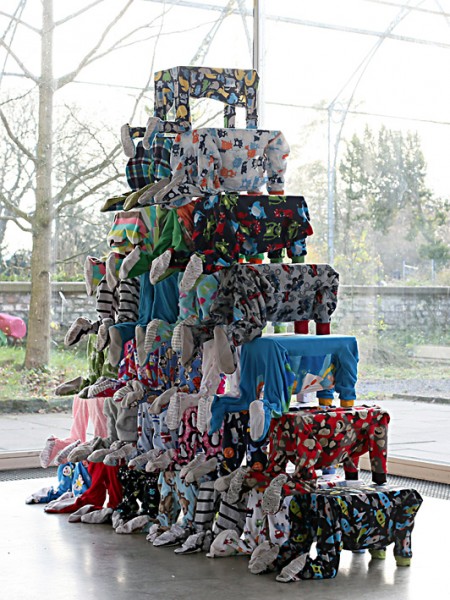 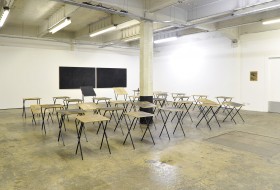 ILLEGITIMI NON CARBORUNDUM elaborates on Craig Mulhollands ongoing interrogation into the role of media and information technologies within post-industrial capitalism. The installation, consisting of over 30 elements, represents a kind of classroom situation with benches and blackboards. The fragile surfaces of the individual table elements show different markings. Another part of the work is a digital opera production.

At a certain point of his career Klaus Merkel decided to make an inventory of his works painted so far. This inventory took the form of large-scale “Katalogbilder” basicially functioning as an index reproducing each painting in the scale of 1:10.

As an ongoing project Merkel invites collector’s or friends to chose different motifs (minimum 2, maximum 20) from this index. The chosen combination of motifs as well as a background colour. also determined by the future owner, are re-painted and combined by Merkel in his so-called Stacks. Merkel thereby takes a retrospective look at his work, bundles it, revises it, and updates it – en miniature and depicts at the same time the individual choices of the owner of the painting. 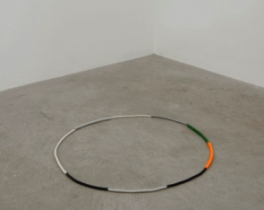 In conjunction with The New Mineral, Nina Canell will realise Black Light (For Ten Performers) – a project which has been specially commissioned by the Twodo collection. Both sculptural intervention and an experiential collective, the work will materialise by the interconnectivity of ten synchronised black-outs in the participant’s geographically disparate homes. Triggered at irregular intervals by the artist, Black Light (For Ten Performers) will run for twelve calendar months.

Nina Canell was born in Växjo, Sweden (1979) and currently lives in New York. Recent solo exhibitions include Paradise [31] (The Douglas Hyde Gallery, Dublin), Walking on No-Top Hill (Galerie Barbara Wien, Berlin) and Digging a Hole (ICA, London). Her work has also been included in several international group exhibitions such as All That Is Solid Melts Into Air (MuHKA, Mechelen), Gwangju Biennale: Annual Report (Gwangju) and Manifesta 7 – The European Biennale of Contemporary Art (Trentino).

SIMON DYBBROE MOLLER
the view, the show, the word and the architect
2006

The title of the exhibition suggests different perceptive and presentational possibilities – seeing, showing, reading – and reflects the diversity of materials and medias, which the artist is using for his show. His works, which mostly examine structures of modernity, take the physical forms of neon lights, video projections, installations and living persons. A game between reality and illusion is staged by the artist at NAK with Twodo members at center.

Simon Dybbroe Møller started his studies in Fine Arts 1999 at Kunstakademie Düsseldorf and continued from 2001 to 2005 at Städelschule in Frankfurt/M.

ANNE-MIE VAN KERCKHOVEN
How reliable is the brain?
2004

With regard to interdisciplinary discourses content- and mediawise the work of Anne-Mie van Kerckhoven is to be explored as a widely unknown and most significant reference – given her long term multimedia investigations from the mid 1970s to 2004. It reflects a deep consciousness for the mental human state. Lead by scientific and philosophic theories it points on border lines in our concept of individualistic modern being, unfolding female and male modes of alienation, compensation, conquest, gaps and anxieties in our human existence.

The Twodo Collection acquired a significant series of Anne-Mie van Kerckhovens works and thereby responds to an actual ‚set up’ of Anne-Mie van Kerckhoven’s working process – declared by the artist herself as her very start of „presentation”: All working series, drawings, animations, films, and installations are just now, after 29 years of continiuous work, set up for their function as a complete – multilayered and most complex – artistic argument.

Starting from the mysterious (non-)existence of the diplomat D.Dr.h.c. Edmund Dräcker – a legend of the German diplomacy and media history – Daniel Roth made up evidences in the form of drawings, objects and sculptures for the Twodo collectors witnessing the exsistence of Dräcker.

From 1997 till 1998 Mel Chin and theartist collective “GALA Committee” designed more than 120 works – reaching from furniture and painting to bed clothes and food bags – being placed in the frame of the TV series “Melrose Place”. The realization of this work can be perceived as a first-time and also very complex collaboration between arts and TV. As its first project Twodo acquired more than 50 pieces of this work in an auction at Sotheby’s, Beverly Hills, California, which set the final point to Mel Chin’s intervention.